Philosophy of the Arts

Posted on 12/04/2008 by Rob van Gerwen
in: Categories: Painting, Philosophy, Photography, and Wollheim.

It is an instructive exercise to compare so-called iconic images (as in: photographs) to paintings that have become an icon. A clear example of the latter would be Picasso’s Guernica, of the former: Vietnam Napalm, photograph by Nick Ut, 1972. 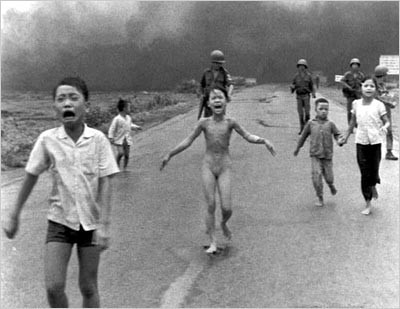 A photographer does not make an iconic image. She makes photographs and one of them might become an iconic image. An iconic image is the paradox combination of a picture of some particular event concerning particular individuals like any other photograph, yet it contains for future audiences associated narratives about the larger context of the event photographed. Thus, when one watches Vietnam Napalm, one’s first thoughts expand on the individuality of the as yet nameless naked girl fleeing a U.S. napalm attack in Viet Nam, to the whole of the Viet Nam war. No photographer can set out to make a picture that will necessarily do that to its ever audiences. (One may find arguments for this thesis in Scruton’s argument that photographs are produced by a causal process that begins with the clicking of a camera.)
The individuals in the photo, though they are de-individualised in the subsequent receptive process, are real.
The audience is interested in a real event for the sake of something bigger that is not really photographed.
One might say, with a reference to Kant’s practical imperative, that with an iconic image the persons portrayed are used as a means for an end, and not as an end in themselves.
In fact, this very formulation can serve as an explanation of guilt-ridden efforts made to retrieve the identity of the persons in the image, even though such efforts may effect some qualification of the iconic status of the image, and their power to carry the larger message.

A painting becomes iconic in an apparently different manner. Expanding from the evident example of Picasso's Guernica, we could say this painting became iconic because of its sheer strength as an image (that might go for iconic photographs as well, but these are pictures proving the reality of some event—no painting could hope to do that), but also on account of the composition on the flat surface, its artistic merit, and this is clearly based in the artist’s manipulation of the paint on the canvas. The people “depicted” in Guernica are not individuals: it will never make sense to try to identify them. Picasso portrayed de-individualised persons who may not even actually have existed: they are de-individualised from the start. Picasso actually made the iconic work!
The crucial difference with the iconic photograph is that the painting naturally, and intentionally carries a larger message, but it has no causal connection to the event that made the painter paint it—that connection exists only through the artistic powers of the painter.

We call a photograph iconic if it carries a meaning that expands on the depicted events, enlarges their scope, but not beyond their historical context. As a pars-pro-toto an iconic photograph proves the reality of something it is not, but which can be said to encompass the depicted, by a causal temporal connection.
A painting that has become iconic, though, may carry its meaning well beyond the historical confines of the event that occasioned its painter to produce it. Thus, Picasso’s Guernica may get to refer to the horrors of war, universally, whereas Vietnam Napalm is forever stuck with the Viet Nam war.
Of course, this is not a complaint; merely the onset of a philosophical analysis.

Anti-Iconic Photography as an Art

Roger Scruton argued that photography is not an art because it is based in a causal mechanism, and is therefore not intentionally dependent on the labor of the artist, as a painting is. Scruton thinks paintings are representational, i.e. they represent what they show, by suggesting to the viewer a way to look at the shown. Such suggestions depend on the detailed, stilistic manipulations of the material, oof which there are none in (ideal) photography. 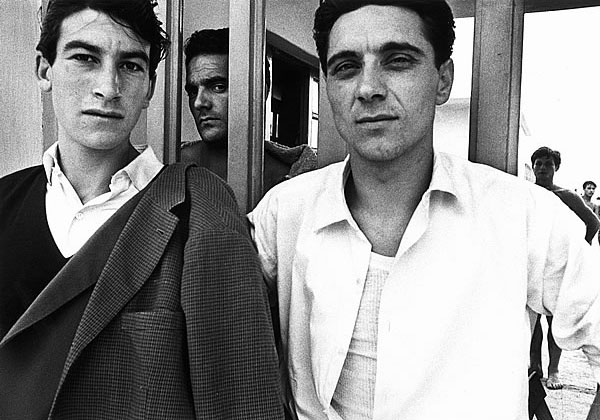 (Thanks are due to Alicia Nugent, for forcing me to develop my argument. I presented a draft of this argument at a meeting on Abstract Images in Art and Science at the Descartes Centre of Utrecht University, February 18, 2009. Here is a review of this meeting.)